The Hack is NOW available online, in both e-book and paperback editions. 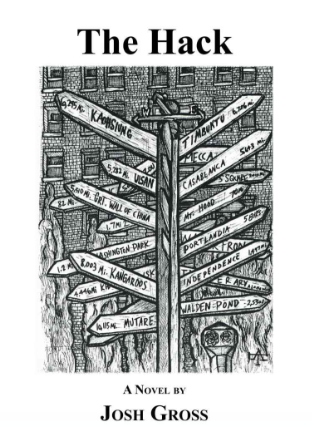 Hamilton Brownstone’s father died when he was six. At the funeral he met a strange, angry boy named Gardner: the brother from another family that neither he nor his mother had known about.

In the years since that meeting, Gardner won the lottery and has used the money on a campaign of self-destruction, largely through his hobby of applying for minimum wage jobs. His goal is rock-bottom, something he can’t ever seem to pull off. Hamilton’s bigggest accomplishment since their meeting is a job at a disco-themed hot dog counter.

Faced with no accomplishments of note, Hamilton has decided to live out the lives of famous writers in order to channel them and write a book.

However between his mother’s neediness, his girlfriend’s acting ambitions and his boss’s constant attempts to make him manager, Hamilton bizarrely decides the only way he’ll be able to finish his book is in prison.

And there’s only one person willing to help Hamilton end up there: his brother Gardner.

“With as twisted and unbelievable a storyline as possible, only Gross’ skill as a writer and rich storyteller makes it possible to pull off a story like this in such a believable manner.” -The Idaho Statesman

“The originality in his approach and his grip of humor writing knock the wind out of me.”-Boulder Weekly

“[His] are the kind of soul-molesting stories that are difficult to forget, and would be a shame to miss out on.”-LauraReviewsBooks.com