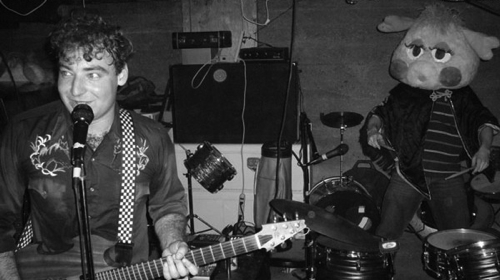 “Discussing the inner workings of Cark is a bit like discussing the anatomy of the penis. Sure, it’s a complex organic structure, but all you really need to know is that it’s there to have fun.” –Matt Petrie, The PSU Vanguard

What is Cark? Well, Cark is not a fish. Nor are they broad-shouldered lasses from the south of France. They might be a ham-fisted, rock’n’roll juggernaut terrorizing the airwaves with their fresh new sound, but then again, they could just as easily be your parent’s insurance agent. Are you confused yet? Good. That’s what Cark is.

United in the belief that the rock world can be a bit stuffy at times, Josh, “Mad-Sombrero” Gross, and Dustin, “Drummer of Death” Wasserman, like to keep the audience on their toes. A hyperactive songwriting process, that covers topics as diverse as picnics, and robotically enhanced hoboes taking over the planet, fuels performances that invite the audience out of their seats to join Cark in their merrymaking. No cow is too sacred for the seppuku two. A few chords and two lines later, we all remember that rock music can be fun, and still rock.

Cark v(kark):
1. To vex, to confuse, to annoy.
2. To disturb in mind or make uneasy or cause to be worried or alarmed.